It isn’t every day a former Marine officer and U.S. Naval Academy graduate steps up to mentor women in the church. Natasha Sistrunk Robinson has done exactly that in her excellent book, Mentor for Life: Finding Purpose through Intentional Discipleship.

Lest anyone get the wrong idea, this book does not contain anything like the

kind of grueling physical boot-camp ordeal or loudmouth sergeants abusing recruits one braces for in the military. But the purpose and content are every bit as dead serious and substantial as what Marines expect (and the country counts on them getting) from those who mentor and train them.

Having said that, Natasha’s military background beautifully informs and shapes both her passion for others and the sense of urgency she expresses as she unfolds the mentoring plan she’s developed and tested. Strong parallels exist between those who battle for their country and the training she’s proposing for those entrusted with the good news of Jesus Christ, but who face a formidably relentless enemy.

I love how she draws on her military experiences to argue that strong, intentional mentoring activity is urgently needed within the body of Christ—for both women and men. This is not only for our own good, but also because of the vital mission Jesus calls us to undertake. That alone distinguishes this mentoring plan from a simple personal-betterment or educational mentoring program.

First, like military training, so also true spiritual mentoring is never an end in itself. Both come within a larger pressing context. Soldiers don’t train simply for their own sakes, but because they’ve answered a call to something far bigger and more consequential than themselves. Believers too have answered a call to become part of something vast and monumental. Our smaller diverse stories are part of God’s bigger global story. We are participants in God’s mission for the world. The seriousness of this bigger context means we cannot take our own readiness lightly.

Second, because every recruit is indispensible to the whole and must be readied. Natasha argues from The 27 Laws of the Navy,

“On the strength of one link in the cable, dependeth the might of the chain.”

Third, because a certain outcome is in mind. Mentoring heart and mind with the truth of God’s word, with a deepening understanding of God’s character and ways, and with spiritual practices that nurture the soul inevitably leads to action. As God’s image bearers who follow Jesus, we bear responsibility for what happens in God’s world. Mentoring helps equip us to embrace God’s heart for the world and to engage on behalf of others for his Kingdom’s sake.

Mentor for Life is also distinct because it doesn’t come with the overwhelming burdens of a one-on-one mentoring relationship (that often results in disappointment). This is an intentional group endeavor. Not only has she written the book, she’s also written a helpful Leader’s Training Manual.

Given the challenges and battles ahead, we need all the help we can get! 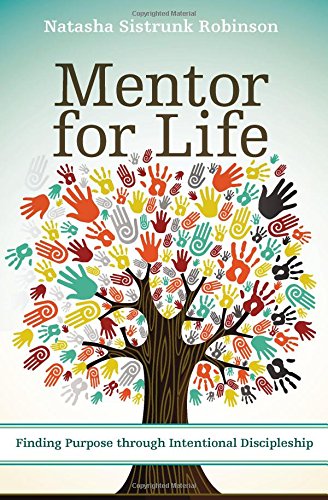