Many of us know this story in John 8, but just to be sure we catch the details I thought I'd repost the story here:

At dawn He [Jesus] went to the temple complex again, and all the people were coming to Him. He sat down and began to teach them.

Then the scribes and the Pharisees brought a woman caught in adultery, making her stand in the center. 'Teacher,' they said to Him, 'this woman was caught in the act of committing adultery. In the law Moses commanded us to stone such women. So what do You say?'  They asked this to trap Him, in order that they might have evidence to accuse Him.

Jesus stooped down and started writing on the ground with His finger. When they persisted in questioning Him, He stood up and said to them, 'The one without sin among you should be the first to throw a stone at her.'

Then He stooped down again and continued writing on the ground. When they heard this, they left one by one, starting with the older men. Only He was left, with the woman in the center. When Jesus stood up, He said to her, 'Woman, where are they? Has no one condemned you?'

Everyone else was ready to throw stones, but not Jesus. Despite the fact she was caught in law-breaking, punishment-deserving sin, He didn't pick up a stone.

Jesus stands with her not against her. He accepts her before advising her on how she should live her life.

God, if only I would learn from Jesus.

But nope. I'm more postured to stand against her than with her. I advise before I accept – if I accept. And I think I have permission to do so since I'm affirming what the Scriptures teach. But am I? Am I affirming what the Scriptures teach when the "Word of God that became flesh and made His dwelling among us” in a Person shows me what it looks like to affirm the written word of God on pages when people are about to be "stoned?"

If the religious leaders were reading the Scriptures correctly (like Deuteronomy 22:22 or Leviticus 20:10), she should have been stoned. They had the authority of Scripture – the written words of God – behind them. And if they would have had their way she would have died. Yet the living Word of God decided He would die for her instead.

Her sin was terrible. Despicable. Death-dealing. Home wrecking. Yet Jesus didn't throw stones. He stands with her, demonstrating in His actions that He accepts her before seeing fit to advise her on lifestyle issues. Later He dies for her so she could have the kind of life that really works when lived under the loving reign of God. I have to believe that His death would mean something to her because while He lived He didn't lambast her.

God, if only I would learn from Jesus.

This same Jesus tells me, tells us, that if we are going to follow Him we have to take Him seriously. We have to set our heart, mind, body and soul toward living as He lived, loving as He loved and take up our own crosses and follow Him, even if it leads us to stand with someone everybody else wants to stone; even if it means we could get hit with stones too.

But it seems to me that we'd rather throw stones. Instead of playing the role of Jesus we find more comfort in playing the role of the religious leaders quoting Scripture while picking up stones. I guess that's the easier route to take. Its less gray and more black and white.

I'm learning from Jesus that acceptance isn't about agreeing with ones behavior, rather it is about affirming one's worth and deeper human identity. When Christians can't tell the difference we find it easier just to pick up stones. You and I will not learn the difference between acceptance and agreement by simply reading about it or listening to someone else talk about it. The only way we'll learn the difference is by standing in the stoning-circle with another. When "issues" have faces and names associated with people we love or consider a friend, we'll might be surprised how much easier it is to distinguish between acceptance and agreement. We must learn to follow Jesus beyond words and follow him with our lives, even if we find ourselves standing with "a sinner" in the stoning-circle.

God, if only we would learn from Jesus. Holy God, for the sake of all those You love and have called us to love, teach us to learn from Jesus. Remind us that the only sinners Jesus spoke harshly to are the sinners who treated other sinners harshly.

Until then, I sure hope we don't find ourselves in the center of that stoning-circle. But I know that if I ever do, Jesus will stand with me. He already has. He still does. Chances are He has done with for you.

Who needs you to stand with them in the stoning-circle?

Who have you been standing against with your words, tone of voice, or posture? Sure, you may have never thrown stones at them yourself but you see others doing it.

How can you begin standing with them instead of against them?" 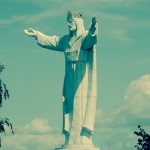 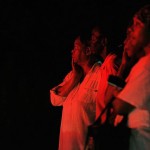