When I wrote my first book, I was on a mission from God!

I had already learned the hard way that I didn’t know enough about God—even though I’d grown up in the church where my father was the pastor and I had earned a seminary degree.

As an adult, again and again to my utter dismay, I encountered the expectation that as a woman I was supposed to live off a regurgitated spiritual diet, depending on others to feed me, tell me who God is, what his plans were for me, and what I should believe.

When I perused the offerings in the women’s section of the Christian bookstore and listened to the “talks” I heard at women’s events—I felt like I was being patted on the head and told not to worry my pretty little head about such weighty matters.

Theology is for men.

One of my seminary professors actually said to me: “Women aren’t wired to be theologians.” Somehow, male genetics contain a spiritual link to the divine which most females lack. 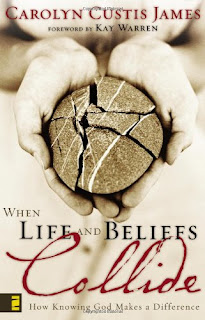 The Danger of Thinking “Theology is for Men”

This kind of thinking is not only deeply flawed, it’s actually dangerous. For starters, it lets women off the hook by excusing us from pursuing a deeper knowledge of God. That leaves us ill-equipped for the struggles we inevitably face in this fallen world. It also distorts relationships between men and women. Relationships supposedly tilt out of balance if a woman knows more about God than a man knows. It is tragic for men who, instead of seeing a woman’s theology as a desirable asset, perceive it as a threat. It’s tragic for women because it leads us to hold back and become less than God calls us to be.

So, when I wrote When Life and Beliefs Collide, my mission was clear. Aiming primarily at women (although I was more than happy for men to read too), I wanted to challenge women to think deeply about God and to see themselves as theologians.

As I said in my book, “The moment the word why crosses our lips, we are doing theology.”

We need to ask God the deep questions of life. More than that, we have responsibility to think deeply about God. Did God really create women to be dependent on men? Are women really to subsist on a regurgitated spiritual diet? Do males really have a special genetic link to God that elevates them spiritually over women? And perhaps the most important question of all: are any of us really reading our Bibles honestly?

The dreaded T-word and the Kingdom

As the first millennium became the second, I proposed a book to a publisher on “the importance of theology for women,” only to face an extra hurdle to the usual obstacles writers face. “Women won’t read a book about theology,” I was told. ” “Don’t use the dreaded T-word. It will scare them off.” 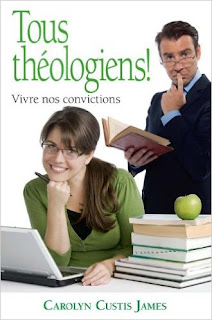 With a rejection letter in hand, what’s a ezer to do? As my husband said, “If it’s important, it’s worth fighting for.”

In 2001, When Life and Beliefs Collide: How Knowing God Makes a Difference, rolled off the presses. My mission was to argue that every woman is a theologian. To put a fine point on it, I also made the case that the first great New Testament theologian was a woman!

But the mission I was passionately committed to didn’t stop with simply encouraging women to use their minds to go deeper in their relationship with God.

Theology is never an end in itself.

I would argue that we don’t understand theology if it doesn’t mobilize us for Jesus’ kingdom. Christian faith is an active faith. It is never enough merely to love God with our minds. We’re called to love him with all our being—heart, soul, strength, and mind.

It means we join God’s mission in the world. As his image bearers, what happens in God’s world is our business.

I would argue that we don’t understand theology if it doesn’t mobilize us for Jesus’ kingdom. Click To Tweet

Freedom Challenge ezers are climbing mountains to raise awareness and funding to combat sex trafficking. In Massachusetts, they’re raising money through Hope for Our Sisters to fund fistula repair surgeries (hundreds so far!) that are giving women and girls back their lives. At Gathering for Hope, among their many projects, they’re donating sanitary napkins to ensure girls in Africa won’t miss school when they have their periods. Women’s ministries in various churches are volunteering for and supporting NGO’s in their communities. Teen-ezers are creatively fund raising to support vital causes to address human suffering. In growing numbers, young women are pursuing law school and seminary degrees to invest themselves in the Kingdom of Jesus. 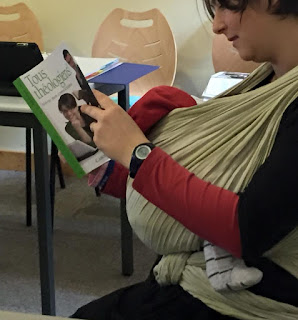 Saturday morning, it did my heart good to wake up to the very good news that my book is still being read. Women are still learning the truth about themselves and taking seriously their responsibility to become better theologians and to live out their theology.

At a Lifesprings International gathering in France (a ministry I’ve been privileged to participate in) women are reading Tous théologiens ! (We are all Theologians! the French translation of When Life and Beliefs Collide). They sent photo evidence to prove it.

Who knows what will come from this?!

Just shows a woman on a mission from God can be a very good thing!